James lives with his family on the slopes of Mount Meru. A large bungalow, in a one hectare small-holding, yet this one has been painstakingly developed into an avian oasis. Once you are through the gate more than likely James will appear from the foliage with Swarovski binoculars and secateurs in hand, wearing a bush hat and cargo trousers, lamenting how ‘urban’ is this private jungle, lying as it does, above the busy safari city of Arusha. A ‘sonic shamba’ he calls it. And certainly the garden reverberates with the exotic song of over forty resident species of bird. Yet it is characteristic of the man that he yearns for wilder places in a place many would consider already wild.

James is a full-time naturalist, has been for fifty five years. He’s also an ecological philosopher. Wrestling with life’s contradictions; birds are both his delight and a potent symbol. They represent his own yearning to be utterly free “in nature”. As indicators of our environmental health, they embody our duty of concern for this living planet.

James’ guiding career began in 1988 for a Sunbird/Wings tour of Assam and Northern India. Since the 1960s his quest for the wild has taken him through Europe, across the Middle East, to the farthest corner of Russia and all around the bird-rich periphery of North America. In the 1980s and 90s he was a professional biological conservationist for lengthy periods in Thailand, on tiny Aride Island in the Seychelles, in Ethiopia, and in Laos. In 1995 he found his ‘soul-mate’ in Elsie MacRae and they ‘settled’ with two young sons in a remote forested corner of western Scotland. By the early 2000s he was studying migration, from a tiny blue cottage in Andalucia, overlooking a ‘migrant bottleneck’ at the Strait of Gibraltar. At the beginning of 2005, “as soon as the lads were old enough, only days after the Great Tsunami” he came to Tanzania, as a volunteer to help with the national waterbird survey, and a decision was made to move the family to Arusha.

James leads bird and wildlife trips and revels in the continued abundance and ubiquitousness of East Africa’s wildlife. As a result of the financial crisis, which curbed foreign travel for so many people, James returned to the ecological impact assessment business in West Africa, work he had previously undertaken in Europe and Asia.  Four years observing the reality of  “offsetting and mitigation“, in the global rush to grab Africa’s resources, was more than enough. So it was with an evident sense of relief that he has recently returned to nature guiding, to writing and to “gardening” with, or perhaps we should say for Nature. 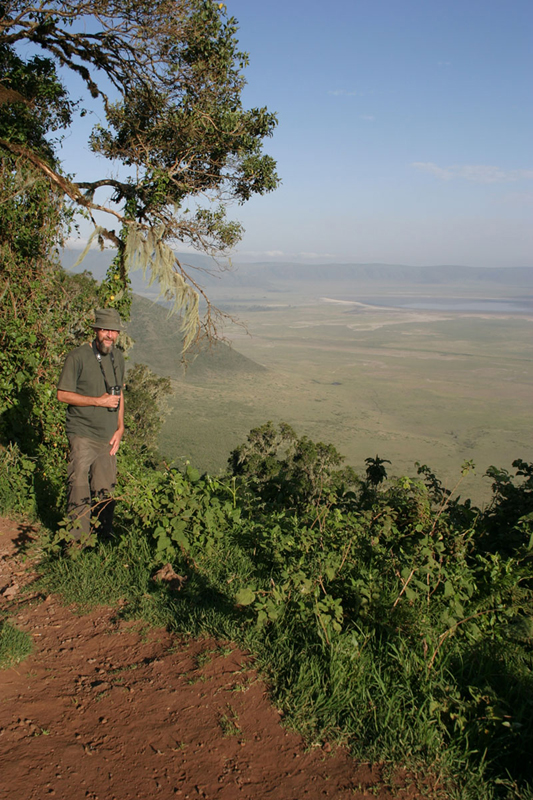 After fifty years travelling four continents, living as much as possible in nature, experiencing great doubts and contradictions whilst reflecting deeply, James delivers a simple, but challenging, message. When, as a young boy, he heard politicians promising permanent economic growth, he was already asking “What future is there for wild nature?”

He describes the relationship between nature and our industrial age as ‘deeply antagonistic’. And he asks the awkward questions. The ones that make us think. “Should we not revere nature? How else can we ever live in harmony?”

“I seek, what you might call, an honest dialogue with Nature, the functioning system of planet Earth, of which we are all a part. Why do we allow our lands and seas, our living landscapes, our ecosystems to be brutally abused for short-term monetary gain? Healing this planet has little need for financiers, their economics and the religion of profit. Go and ask any ten year old student! It has much to do with our regaining love and respect for “Nature”, regardless of our selfish desire for greater physical comfort and our runaway materialist expectations. So let’s all – each in our own small way – start now!”