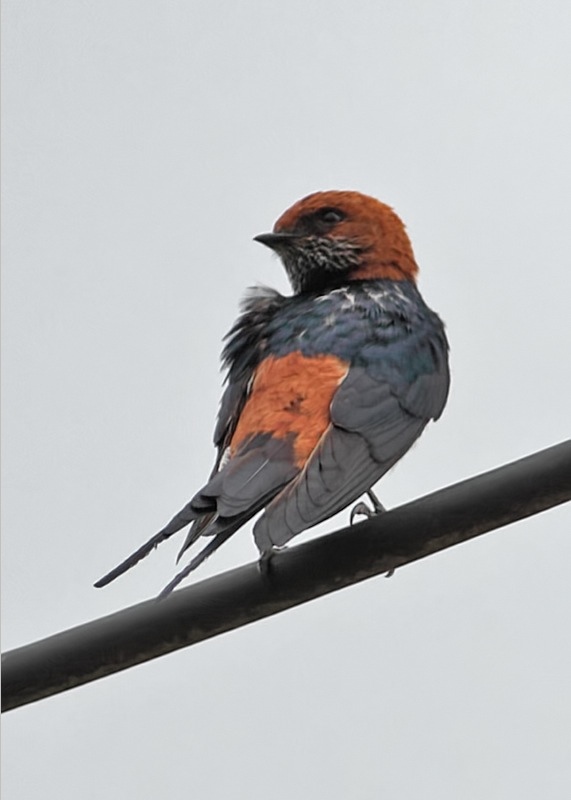 Anticipating the first rain in ten days and thanks to protracted daily power cuts, Dismas and I have attacked the Lantana brakes with a vengeance, in the week just passed. This rioting alien once known as the American Bramble has, since the plentiful Long Rains of March-to-May, completely choked the finest glades in my garden. It has surged in all directions to consume all the best spots for Palearctic bird migrants – primarily birds of ancient wood pasture – glades painstakingly developed between 2009 and 2012. Especially significant is the glade that lies right outside the twin windows of our east-facing bedroom and Elsie’s consulting room of peace.

So we attack the Lantana. More or less immediately upon arrival at the site, tools in our hands, Pi (our trusty Breton spaniel) discovers one of our neighbour’s three patchy grey and white cats, hiding, spitting in the shade. We see that the feline is suckling four still blind kits, in a rough den, on the eastern edge of one dense sprawler of a lantana thicket. No wonder my beloved buffy Eastern Nightingales (golzii), now arriving at Mount Meru, and the more sombre grey-brown Sprossers, move-on the first night after their arrival. No wonder that our formerly resident Ruppell’s Robin-chats are no more, and no wonder the melancholy cooing Blue-spotted Wood-doves, a breeding rarity locally, have declined from three pairs in 2012 to one!

At least the Cape Robin-chat, who serenades us for the entire work party visit, is able to find enough arthropod food within the taller Lantana thickets of the garden, where a woefully sparse ground flora nevertheless permits unhindered visibility of the oncoming moggy of feral-suburbia.

We begin to tackle the Lantana in order to create an east-west ride between our northern hedge and a central grove of ornamental trees. As always (so it seems) it was alien saplings that the upwardly mobile owners planted long ago. Trees that nevertheless now provide the central arboreal feature of this “garden”. As we start a Eurasian Tree Pipit (the first of the return here) sweeps down, in bounding flight, to the centre of this wilding wedge, from the direction of the mountain. “Skeeze … skeeze” the pipit calls. It lands in a gnarled Grevillea of the northern boundary hedge, peering as if to survey the bending backs and benign handiwork. Unfortunately we have not been at the clearing long enough to create enough of a disturbed area to provide sufficient foraging opportunities and so after a minute of surveillance it flies on southward. “Skeeze”!

Five minutes later two White-necked Ravens shot overhead, their falsetto caws attracting my attention as much as the whoosh-whoosh beating of their wings, as they rushed, as only Ravens can, for the Marabou Stork hang-out of a knacker’s yard at Sakina hill, a kilometre deeper into town.

At the same time a male Lesser Striped Swallow, sensing the hike in atmospheric moisture, circles the garden calling with that rusty gate hinge call that signifies a nesting site is near. It’s just over the hedge in our neighbour’s water tower. And their last year’s nest has been eyed, on some recent evenings, by a displaying pair of African White-rumped Swifts.

During the ensuing three-hour conservation workout twenty three bird species are recorded. Yet only two of these in my suburban avian oasis were Eurasian migrants: the pipit and a small flock of (Common) House Martins

who pass each day, in both morning and evening, between foraging areas over my local patch in the Ngaramtoni korongo fields (= wadi of the birds) and an unknown roost site which I suspect is in the cliffs of Mount Meru in Arusha National Park.

After completing my work, and as Dismas cleared away the cut Lantana rods, to be burnt as fuel to cook the food for our carbon-neutral flea ridden shenzi guard dogs, I wsatched acitrus Swallowtail laying eggs on an unknown spindly shrub outside the bedroom window. Suddenly a male African Paradise Monarch (flycatcher), the first full adult male – sporting ribbon tail and long white wing sash – to grace our garden, danced into view with those linen-ripping calls so characteristic of the genus Terpsiphone. Then a female flew past and with an audible click of the bill snapped, somewhat optimistically I thought, at the large, slowly fluttering swallowtail. It missed and landed on a bar of the open window only a foot in front of my belly! This was the second time in three hours that I could have touched a forest insectivore. At about 8.30 a Grey-backed Camaroptera, with squeaky “Bleating Bush-Warbler” calls and noisy wing-snaps had flown into the Lantana I was cutting to feed around my feet.

We must be doing something right. As we simulate Giant Ground Sloths, from the jungles of Guyana, trundling about their range, to browse and break the spiky Lantana for a commonwealth of species. Reuniting Gondwana in spite of man unkind!