From three huge Verreaux’s Eagle-Owls, snoozing away the heat of the day in the shady canopy of a great fever tree, as we drove from our arrival at the airport toward “Hatari” our first lodge, hidden away at the foot of mighty Mount Meru; to the mother Cheetah who had been teaching her three cubs how to hunt, on the seemingly limitless short grass plains of the eastern Serengeti, this tour lived-up to its enviable reputation. A reputation for providing, in considerable comfort, some of the greatest and most intimate wildlife experiences available today. Certainly it ‘lived-up’ to what our group expected of the vast natural treasure trove of life that is Northern Tanzania.

We began by birding in the very compact, but incredibly diverse, National Park immediately to the east of the bustling safari portal that is Arusha. Here we easily found such range restricted species as the vociferous Red-throated Tit ‘twanging’ in the spiny acacias and striking Taveta Golden Weavers nest building in the rushes beside freshwater Lake Longil. In the cool of Meru’s evergreen forests we delighted at the squirrel-like bounding antics of Hartlaub’s Turaco and the sheer majesty of hirsute troupes of Black-and-White Colobus monkeys. One of those rare moments of profound tranquility was experienced by all when we visited the Maio waterfall in the Tolkein-esque Juniper and Podocarpus forest that clothes the middle elevations of this mountain. Naturally it was in Arusha Park that we were introduced to several of the avian families and genera that were to be our colourful companions throughout our safari.

In the largely verdant baobab savannas of Tarangire NP we were very lucky indeed to find a small herd of Oryx grazing in the yellowing grasslands just to the east of the safari lodge. Alongside the river and at Silale swamp we found a fabulous selection of birds ranging from Goliath Herons and Saddle-billed Storks to a shuffling variety of tiny Estrildid finches that were foraging in the savanna stubble, at the base of a sausage tree, under which the massive hulks of sprawling lions were disconcertingly well camouflaged.

Our day in the vastness of the Ngorongoro Crater was, as always, simply beyond mere human words. A huge number and diversity of birds was complemented, if not outshone, by a show of mammals, by beings such as two lumbering Black Rhinoceros, that looked as if they were from another time, if not quite yet another planet!

One of the benefits of this safari is that we undertake a double transect of the moist grasslands and bush of the legendary central Serengeti. First by heading from our sumptuous lodge at Seronera, near the hub of the park, west to Lake Victoria the first day, then by trekking back east to Lake Ndutu the next. Between these epic journeys, flanked by thousands of storks, by bustards, soaring vultures and sedately stomping Secretary Birds, journeys when hardly a soul is seen, we spent the night at Speke Bay Lodge where many ‘western’ birds (such as Swamp Flycatcher, Black-headed Gonolek, Red-chested Sunbird and several species of weaver) were added easily to our list. 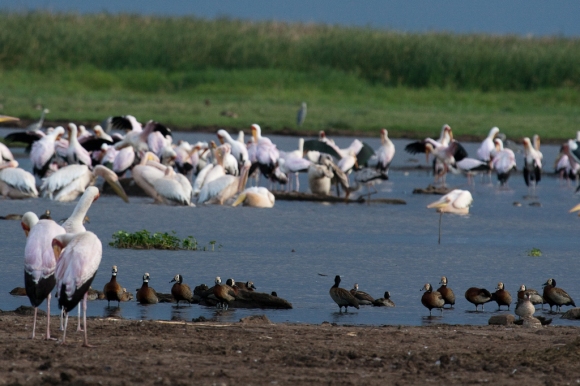 These ‘game drives’ delivered nearly all the hoped-for bird species as well as a Leopard and her cub at rest, high in a tree beside a stream, east of Seronera. Mammals abound of course. Our Toyota was forced to weave its way through huge herds of Wildebeest and Zebra, past chestnut and slate Topi, and the two abundant yet delightful gazelle species: Thomson’s and Grant’s, so that we might gaze at innumerable Hippopotamus in their pungent muddy pools. Small wetlands these, yet ones that really did teem with shorebirds of every shape and size, many were migrants in fine summer plumage, on their way back to the steppes, or the far northern tundra vastness of Africa’s greatest neighbour Asia.

Lake Masek was spectacular. Experiences here ranged from the macabre, when we watched an immense Nile Crocodile as it drowned a yearling Wildebeest under the bubbling brackish waters, to the comical, when we sought dapper migrant cuckoos and some retiring resident finches at a lush green soak-away, right behind the laundry block at the back of camp.

We returned east to the red-soils of Karatu via the Endulen road, through a quiet land that still belongs to the real Masai! Here in a broad-crowned croton tree, where Olive Pigeons, two species of oriole and Amethyst Starlings gorged on tiny globular fruit, a female Black Bishop was watched as it repeatedly fed a fledgling Diederik Cuckoo, the first sighting for our guide of brood-parasitism involving these two particular species.

For our last night in Tanzania we were upgraded to Kitela Lodge, a luxurious abode, on the edge of the Crater Highlands forest, just above Karatu. Next morning we walked up into these open forests, where great Elephants and African Buffalo roam, and all were rewarded with scope views of Narina Trogon, whilst fascinating passerines such as the delightfully acrobatic White-tailed Blue Flycatcher fluttered through the canopy over our heads. All too soon we had to turn our backs on wonder, for the last time here and, after a lovely lunch, make our way, with understandable reluctance, to Kilimanjaro International Airport, the broad tarmac strip between tall waving grasses, where our great adventure had begun, just less than two – utterly action-packed – weeks before.

These three photos were taken by my good friend Zul Bhatia on his wildlife safaris in Northern Tanzania – many thanks Zul !